Federal law enforcement officials are probing whether “criminal actors” are coordinating violent activities during protests and are looking into reports that “rocks and bricks” have been dropped off to throw at police and other law enforcement as cities across the country grapple with the uptick in violence, a senior Department of Justice official said.

“You see the hallmarks… We’re trying to see if there’s a coordinated command and control, you see those bread crumbs and that’s what we’re trying to verify,” said the Department of Justice official.

There have been more than 100 arrests in Washington as a result of the protests and riots related to the death of George Floyd in Minneapolis, according to federal officials. Around 20 of those people were not charged. Meanwhile, 70 to 75 people have been charged with crimes such as assault, breaking and entering, destruction of property and other violations.

That person added that officials are looking at “trends” and the possibility that extremist groups have been involved in directing violent acts in recent days.

Another DOJ official said leads being pursued and cases being developed — related to Antifa and other extremists groups — by several different U.S. Attorneys offices.

The official declined to elaborate further because these cases and investigations are ongoing.

It comes amid growing instances of objects being hurled at police across the country.

In New York, officials described more violent acts by protesters. New York Police Department Commissioner Dermot F. Shea said Wednesday that some of plastic bottles that have been thrown at police are often filled with cement. He also described multiple incidents of Molotov cocktails thrown at buildings with people inside.

He also described how two sites were found in Brooklyn and Queens where pre-staged bricks were placed and transported to protests. Shea said construction sites have been burglarized in Manhattan – where bricks were believed to be taken.

In Tampa, there were reports that members of the bomb team found mortars in bushes downtown, and bricks and other items were hidden in trash cans to throw at police officers. 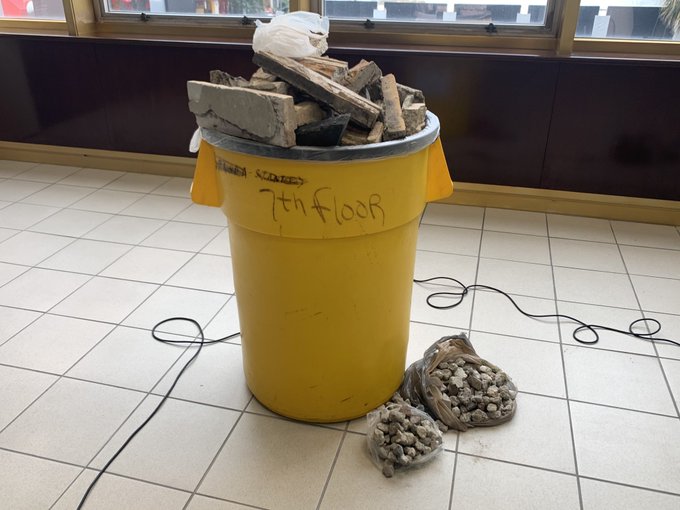 In Seattle, a video out up online by an anarchist shows that around midnight, a crowd of 100-150 nearly all-white agitators with umbrellas started throwing bottles at police.

Fox News is told federal law enforcement officials are looking at “ways in which we can exploit phones and data communications that could give us a mosaic to see if there’s a coordinated command and control, that’s what we’re looking for.”

Meanwhile, the Justice Department is pushing back on what it called some “erroneous reporting,” one official added, saying that they have not dropped any rioting charges. Rather, those charges were never made in the first place, the person said.

Procedurally, these officials say people can be arrested for “rioting” but the U.S. Attorneys Office in Washington did not actually charge anyone with rioting. One law enforcement source told Fox News “that charge is too nebulous.” Instead, the charges were more specific: assault and battery, breaking and entering, and destruction of property.

There has been one individual charged with a federal crime — for breaking into a bank and attempting to rob the establishment. And there are eight more federal charges pending, mostly for the destruction of property, including federal law enforcement vehicles and the defacing of national monuments.

In Washington, D.C., There have also been “significant injuries” to several federal law enforcement officers since the weekend, including over 50 Park Police officers and more than 30 Secret Service agents, according to federal law enforcement officials. Most of these officers and agents were struck in the head with projectiles, including rocks and bricks, several have been hospitalized.

Bill Barr, the Attorney General, has been involved in decisions related to dealing with protesters, including sending riot teams to cities. He was spotted in Lafayette Square on Monday observing the protests outside the White House before officials cleared the area ahead of President Trump venturing out to observe the site. Administration officials said Barr himself made the decision to extend the security perimeter around the park because of the protests.

Being afraid to defy the mob