Hurricane Florence continues barreling toward the southeastern United States on Thursday, bringing with it lashing winds, powerful rains and the threat of “catastrophic” flooding. The large and dangerous storm is expected to crash into the coast of the Carolinas and could impact millions with rainfall measured in feet, not inches, warnings of flash flooding and the potential for extended power outages.

Hurricane Florence brought rain and wind to North Carolina on Thursday  morning, but what will happen next? According to the Capital Weather Gang, nothing good:

Conditions will deteriorate through Thursday: Starting along the coast, winds will accelerate, the rain will intensify, and the angry, agitated ocean will surge ashore. The storm’s center is expected to make landfall Friday in southeast North Carolina, which will coincide with the most severe effects. Storm surge, the rise in seawater above normally dry land at the coast, could rise a story high. On top of that, a disastrous amount of rain — 20 inches, possibly even as many as 40 — is expected to fall.

Forecasters warned Thursday afternoon that “dangerous” flooding and “life-threatening storm surge” were still expected, with large swaths of coastal North Carolina likely to see between 20 and 30 inches of rain — and possibly more in some places.

Powerful winds were also still projected to sweep across the southeastern United States in the coming days, according to the National Hurricane Center. Tropical-storm-force winds could stretch as far inland as Ohio, Kentucky, Tennessee and Alabama in the coming days, the center said. 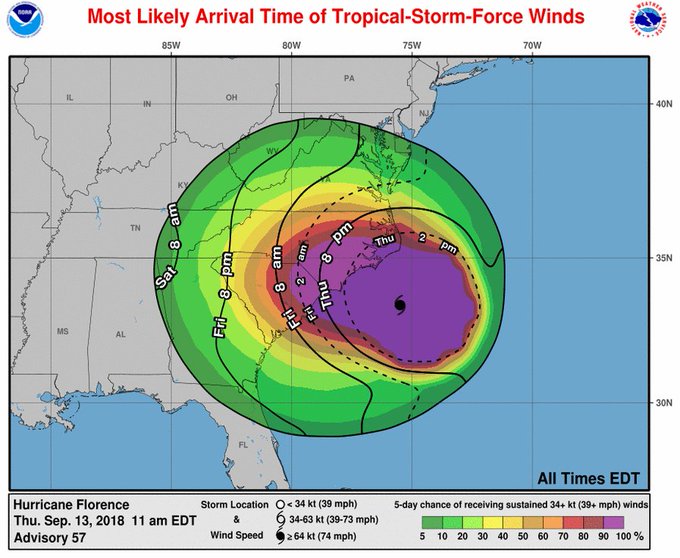 Damaging hurricane-force winds are likely along portions of the
coasts of South Carolina and North Carolina as soon as this evening,
and a Hurricane Warning is in effect. Strong winds could also spread
inland into portions of the Carolinas from #Florence.

North Carolina Gov. Roy Cooper (D) sought to remind people in his state Thursday not to be lulled into a false sense of calm because the storm’s wind speed had declined and its forecast track had shifted south, warning that Florence still posed a mortal threat to residents.

“Don’t relax,” he said at a briefing. “Don’t get complacent. Stay on guard. This is a powerful storm that can kill. Today, the threat becomes a reality.”

Cooper spoke as the first bands from Florence began to lash the Outer Banks and elsewhere, describing a “massive storm” that he said would spread heavy rainfall across the state for days to come. Even if the storm does make landfall in South Carolina, he noted: “We’re on the wrong side of this thing. This storm will bring destruction to North Carolina.”

Cooper pointed to the state’s history with Hurricane Matthew, a destructive storm that marched up the coast and caused heavy flooding in North Carolina.

“Remember that Hurricane Matthew didn’t even make landfall in North Carolina, and look what it did to us,” he said.

The storm has ground much of life across North Carolina to a halt, closing dozens of school districts as well as nearly all schools in the University of North Carolina system, officials said. Cooper said that about 7,000 people in the state have headed to 108 open shelters, with additional facilities expected to follow.

Antisemitic Acts in California Rose 12% in 2019 Despite Overall Hate...