Israel’s Foreign Ministry has issued a strong protest with the Jordanian government after the Arab state’s Information Minister and Government Spokesperson Jumana Ghunaimat, was photographed stepping on an Israeli flag painted on the floor of Amman’s trade union headquarters last week.

Jordan’s trade union installed the Israeli flag on the floor at the entrance to its headquarters as a demonstration of protest to normalization of relations with Israel. The installation is accompanied by shoe marks treading over the Jewish state’s blue and white standard in an apparent invitation for building visitors to step on the flag.

The minister found herself as the target of anger by Israel’s Foreign Ministry after she was shown stepping on the flag on her way into the building for a meeting. 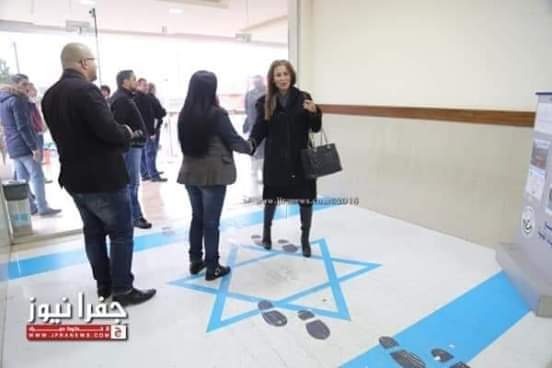 Our friend: the Jordanian Information and Government Spokeswoman, @Jumanaghunaimat arrives at the Trade Union Headquarters in Amman yesterday afternoon, and steps on the Israeli flag. #Jordan #Israel @JackyHugi

In response, Israel summoned the newly appointed Jordanian ambassador Ghassan Majali, to the Foreign Ministry. Official protests were also submitted by Israel to the government in Amman and the Jordanian embassy in Israel.

Israel and Jordan have maintained diplomatic relations since the signing of a peace deal in 1994, though many Jordanians continue to object to formal relations between the formerly warring neighbors.

In October, Jordan’s King Abdullah II announced he would not be renewing a land lease stipulated as part of the 1994 peace treaty signed between Israel and Jordan.

The decision to terminate an appendix of the 1994 Israel-Jordan/Wadi Araba peace treaty relating to the lease of the kingdoms’ sovereign land to the Jewish state. The move came amid increasing domestic pressure from a Jordanian public hostile to normalized diplomatic relations with Israel.

Leading up to the King’s decision to terminate the land lease, demonstrators in Amman took to the streets urging him to exercise Jordanian sovereignty with some even pushing for the peace treaty to be rescinded altogether. Israeli newspaper Haaretz reported that eighty-seven Jordanian lawmakers signed a petition on the matter.

When it was signed in 1994, the Wadi Araba treaty made Jordan one of only two Arab countries to have reached a peace agreement with Israel, along with Egypt in 1979.

Under Jordan’s constitutional monarchy, only King Abdullah has the power to eventually rescind the peace deal with Israel.

Jordan controlled the West Bank as well as East Jerusalem and the Old City until the Six Days War in 1967, when Israel took them over alongside the Gaza Strip, the Golan Heights and the Sinai, which was later returned to Egypt.

Being afraid to defy the mob