Maxtech Networks system has linked a ‘daisy-chain’ of radio devices through twisting, water-submerged cavern, giving youths voice, data, and video connection to the outside world

Rescuers working to save a Thai youth soccer team trapped deep inside a flooded cave are using an Israeli technology to maintain communication with the 12 boys and their coach.

Maxtech Networks told The Times of Israel Thursday that its system is providing a voice, data, and video link to the boys who have been stuck in the cave for nearly two weeks, and were only located earlier this week.

The boys, aged 11 to 16, and their 25-year-old coach entered the sprawling Tham Luang Nang Non cave in the northern province of Chiang Rai after a soccer game on June 23. They were found by two British rescue divers on July 2, nine days after they disappeared.

In the Israeli system, a string of small devices, similar to handheld radios, pass wireless communications between each other, enabling a link in places regular radios won’t work, such as where there are major obstacles blocking the line-of-sight between the two ends of the line.

“It is like a daisy-chain,” explained Uzi Hanuni, CEO of Maxtech.

It took 19 of the devices to complete the link to the boys in the cave. They have enough battery power for 10 hours’ use at a time.

“It is a very complex scenario inside the cave,” Hanuni explained. 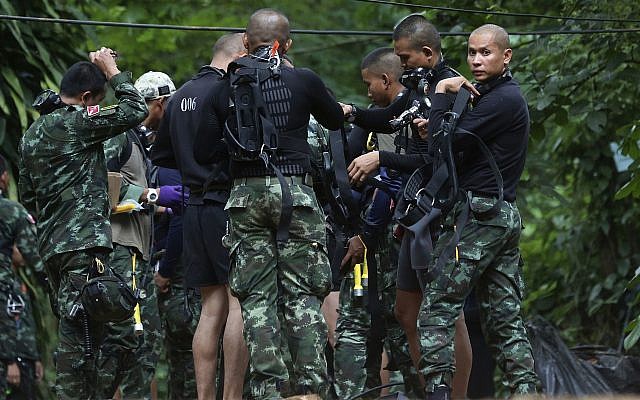 Rescuers prepare dive gear at the entrance to a cave complex in which 12 boys and their soccer coach are trapped in Mae Sai, Chiang Rai province, in northern Thailand, July 4, 2018. (AP Photo/Sakchai Lalit)

Some sections of the perilous, twisting, passageway, estimated to be over a kilometer in length, are also submerged beneath the rainwater floods that trapped the youths. Hanuni said that data cables were used to traverse those parts of the cave.

After an Israeli acquaintance who runs a rescue team in Thailand and was involved in the early efforts to find the boys contacted Hanuni, Maxtech employee Yuval Zalmanov flew out to Thailand on June 25, bringing the equipment with him in a suitcase.

“We are happy to be able to help,” Hanuni said and added he expects an attempt to extract the children to be made in the coming days. Others have said it may take weeks or months till such an attempt would be made.

Authorities said the boys, who appeared skinny but in good health in several videos released by the Thai navy, were being looked after by seven members of the Thai SEALs, including medics, who were staying with them inside the cave. They were mostly in stable condition and have received high-protein drinks.

Officials have said they prefer to get the boys out as soon as possible because heavy rain is expected to start by Saturday, which almost surely will raise water levels again in the cave, making passage in some areas even more difficult if not impossible.

Following their success in Thailand, Hanuni said he now wants to set up a quick response team, equipped with their technology, which would be ready to travel to emergencies all over the world.

Source: The Times of Israel