“This is no longer a protest,” Garcetti told local media. “This is destruction. This is vandalism.”

Garcetti was asked whether the National Guard might be needed, something he was dismissive of earlier Saturday.

“Anything is possible. Absolutely,” Garcetti said, noting he would be speaking with California Gov. Gavin Newsom. “That takes some time. Sometimes it can take overnight to mobilize.”

“I will always protect Angelenos’ right to make their voices heard — and we can lead the movement against racism without fear of violence or vandalism,” Garcetti said in a statement Saturday.

“The vast majority of people taking to the streets are doing it peacefully, powerfully, and with reverence for the sacred cause they’re fighting for,” he continued. “This curfew is in place to protect their safety — and the safety of all who live and work in our city.”

Garcetti’s decision came amid large protests in Los Angeles on Saturday, and following rioting earlier in the week.

In L.A., rioters on Wednesday night at one point were seen burning an upside-down American flag. 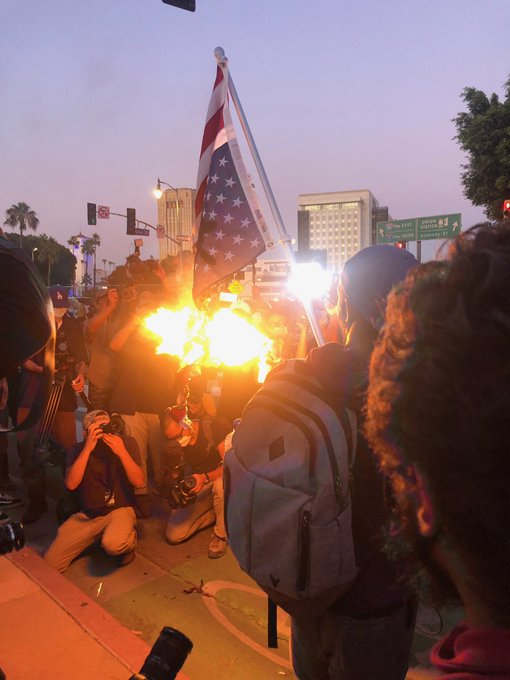 The protests and riots broke out across the nation after Floyd died in Minneapolis police custody Monday.

An employee at a grocery store called police and accused Floyd of trying to pass a counterfeit $20 bill. Floyd, who is black, was then arrested and handcuffed by Officer Derek Chauvin, who is white, and pushed to the ground.

Chauvin and three other officers were fired Tuesday in connection with Floyd’s death, then Chauvin was arrested Friday on murder and manslaughter charges.

A cell phone video shows Floyd’s head is turned to the side and he does not appear to be resisting. Chauvin had his knee pressed to the back of Floyd’s neck for several minutes as Floyd is seen gasping for air and begging Chauvin to stop. He does not. Bystanders say they also heard shouting at Chauvin to take his knee off of Floyd’s neck.

Chauvin was charged Friday with third-degree murder and manslaughter in Minnesota.