Touring northern front, defense minister brushes off Trump’s comments on Palestinian state, says he only cares about a Jewish state

“Everything is ready and set,” Liberman said at a press conference at the site. “It’s all on the other side [to decide] now.”

This Israeli offer to reopen the Quneitra Crossing would restore the situation along the border between the two countries to what it was prior to the Syrian civil war, which began in 2011.

Through the metal gate separating the two sides, Syrian crews could also be seen working. Israeli officials speculated that the crossing could reopen in the coming weeks. 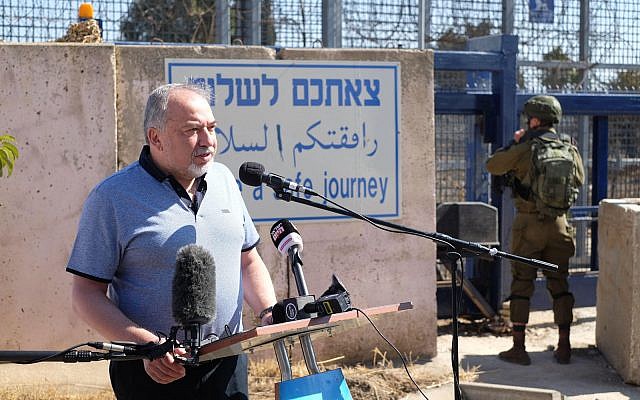 Defense Minister Avigdor Liberman speaks to reporters at the Quneitra Crossing on the Syrian border with the Golan Heights on September 27, 2018. (Judah Ari Gross/Times of Israel)

Liberman stressed that Israel was demanding that Syria abide by “every single section” of the 1974 ceasefire agreement between the two countries, which ended the 1973 Yom Kippur War and created a demilitarized zone along the border.

During the press conference, the defense minister also briefly discussed comments made by US President Donald Trump about his apparent support for the creation of a Palestinian state as a solution to the Israeli-Palestinian conflict. Trump appeared to backtrack hours later during a frenzied news conference on the sidelines of  UN General Assembly, saying that the actual solution was less important to him, so long as there was a peace deal in the end.

“A Palestinian state doesn’t interest me. What interests me is the Jewish state,” Liberman said.

The defense minister reiterated his calls for Arab citizens of Israel to become part of a future Palestinian state, saying they were the “main issue.” 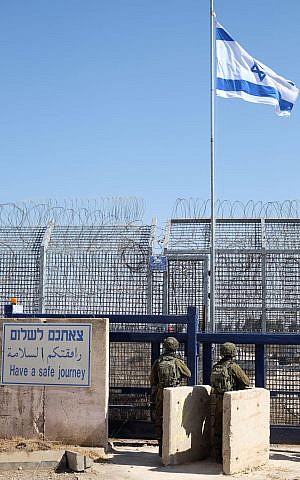 Israeli soldiers guard the Quneitra Crossing on the Syrian border with the Golan Heights on September 27, 2018. (Judah Ari Gross/Times of Israel)

Liberman refused to comment on any developments in Israel’s ongoing crisis with Russia over the downing of a Russian spy plane by Syria during an Israeli air raid last Monday.

“We have no interest in having a conversation with Russia through the media,” he said.

Liberman said he would only reiterate the importance of Israel’s continued coordination efforts with Russia and sent condolences to the families of the 15 soldiers killed in the friendly-fire incident, which Moscow has blamed fully on Israel.

The Quneitra Crossing was shuttered in August 2014 following a number of attacks by Syrian rebels, which drove out the United Nations peacekeeping force that controlled the crossing.

The UN Disengagement Observer Force, known by its acronym UNDOF, has slowly returned to the border between Israel and Syria — a move that was welcomed by Jerusalem.

“UNDOF troops have started working and patrolling, with IDF assistance. This shows that we are ready to open the crossing as it was before. The ball is now in Syria’s court,” Liberman said.

The peacekeeping troops could be seen monitoring the border crossing from an adjacent metal guard tower. 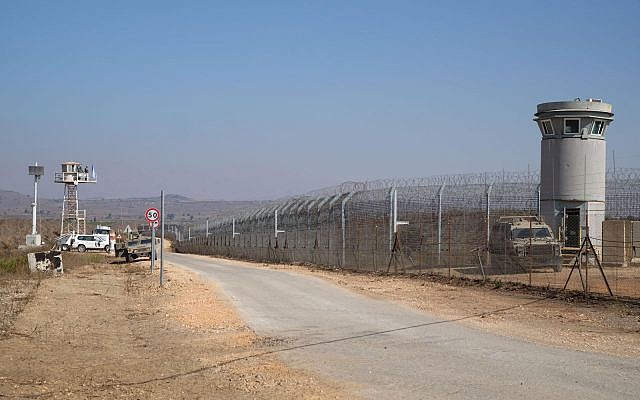 Soldiers from the UNDOF peacekeeping force guard the Israeli-Syrian border near the the Quneitra Crossing on the Golan Heights on September 27, 2018. (Judah Ari Gross/Times of Israel)

Liberman said the decision to reopen the crossing does not change Israel’s relationship with the Syrian regime or with Assad, whom the defense minister called a “war criminal.”

The crossing has in the past primarily been used by the Druze population in both countries, but if it reopens, it will mostly serve the UNDOF soldiers, allowing them to pass through it for one hour in the morning and one hour in the evening.

In addition to serving as a pedestrian crossing for the Druze living in Syria and the Israeli Golan Heights, the crossing has also been used to transport apples from Israel to Syria, which Liberman said could happen again.
Source: The Times of Israel