The United States has “thrown more than $10 billion” in aid to the Palestinians, but that spending has brought the region no closer to peace or stability, the US Ambassador to Israel David Friedman charged Tuesday, in an address explaining why US President Donald Trump thought it was important to halt US funding to UNRWA, the UN’s Palestinian refugee agency.

Friedman lamented that US taxpayer funds, rather than be used positively, had been partly spent on Palestinian Authority stipends to terrorists, to fund inciteful education, and to finance an agency — UNRWA — that, by extending refugee status to descendants of Palestinian refugees, was perpetuating rather than helping solve the refugee problem.

“Since 1994, the United States has thrown more than $10 billion in humanitarian aid to the Palestinians,” Friedman said in a Rosh Hashanah speech. “Without minimizing the importance of medical treatment and quality education for children — and we don’t minimize that, not even for a minute — we found that these expenditures were bringing the region no closer to peace or stability, not even by a millimeter,” he said.

“To spend hard-earned taxpayer dollars to fund stipends to terrorists and their families, to expend funds to perpetuate rather than to mitigate refugee status, and to finance hate-filled textbooks — I ask you, how does that provide value to the United States or the region?”

Friedman added that the US would continue to seek other ways of supporting Palestinians.

“Make no mistake, the USA is a generous nation and we would love, truly love, to invest in this region for the return on investment of peace and stability in Israel and a better quality of life for the Palestinians,” he said. “Indeed, we continue to provide funding, 40 percent of the funding for the UN High Commission on Refugees. UNHCR, in contrast to UNRWA, seeks to end statelessness, not deploy it as a political weapon.” 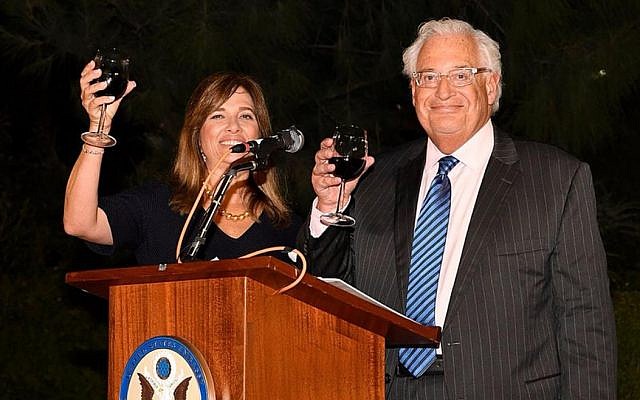 US Ambassador to Israel David Friedman (with his wife Tammy) makes a Rosh Hashanah toast for peace, September 4, 2018 (Courtesy)

In a Rosh Hashanah toast, Friedman also issued a call for peace: “Let us dedicate ourselves to building upon our great accomplishments, to making the US-Israel relationship even stronger, and to bringing peace, prosperity and security to the region.”

Last Friday, the State Department said in a written statement on UNRWA that the United States “will no longer commit further funding to this irredeemably flawed operation.”

The US had supplied nearly 30 percent of the total UNRWA budget, which provides health care, education, and social services to Palestinians in the West Bank, Gaza Strip, Jordan, Syria, and Lebanon.

Announcing the end to all its funding for UNRWA, the State Department castigated the agency for failed practices, and indicated that it rejected the criteria by which UNRWA defines Palestinian refugees, whereby the UN agency confers refugee status not only on original refugees but on their millions of descendants.

“The fundamental business model and fiscal practices that have marked UNRWA for years – tied to UNRWA’s endlessly and exponentially expanding community of entitled beneficiaries – is simply unsustainable and has been in crisis mode for many years,” the statement said, a reference to the fact that the agency grants refugee status to descendants of the original Palestinian refugees, something not granted by the UN to refugees from any other place.

The Palestinians claim that five million “refugees” — tens of thousands of original refugees from what is today’s Israel, and their millions of descendants — have a “right of return” to Israel. Israel rejects the demand, saying that it represents a bid by the Palestinians to destroy Israel by weight of numbers.

It says there is no justification for UNRWA’s unique criteria, by which all subsequent generations of descendants of the original refugees are also designated as having refugee status, including those born elsewhere and/or holding citizenship elsewhere; such a designation does not apply to the world’s other refugee populations.

Israel’s population is almost nine million, some three-quarters of whom are Jewish. An influx of millions would mean Israel could no longer be a Jewish-majority state.

On Tuesday, the White House also announced that it planned to slash more than $200 million in overall aid to Ramallah.

That same day, US Ambassador to the United Nations Nikki Haley questioned Palestinian claims to a “right of return” to modern Israel, saying she believed that the hot button issue should be taken “off the table.”

Haley suggested the Trump administration would consider an official rejection of the Palestinian demand that all refugees who were displaced between 1947 and 1948 — as well as all of their descendants — be allowed to return to modern-day Israel following a final peace accord.
Source: The Times of Israel