New York City Mayor Bill de Blasio was drowned out by booing at a memorial for George Floyd in Brooklyn on Thursday, as the preacher who introduced him pleaded with attendees to show “respect.”

When McCray took the microphone first, the booing subsided. 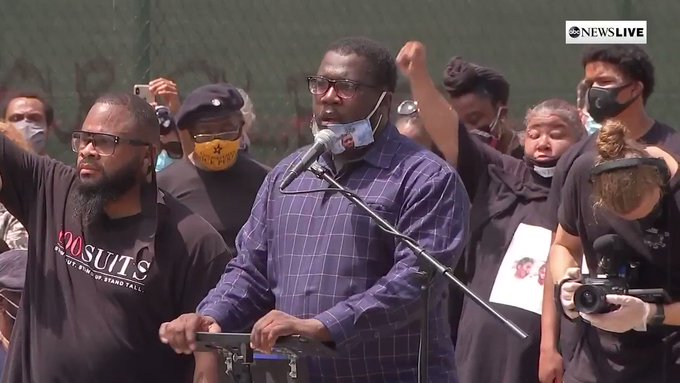 De Blasio had also received boos as he arrived at the memorial, with crowds shouting “De Blasio, go home” as he walked across the stage.
Later, as he tried to address the crowd, his words were barely audible over crowds chanting “Resign.” At another point, the crowd chanted “Turn your back,” and many turned around so as not to face the mayor.

Shortly after, de Blasio gave up and ceded the microphone to George Floyd’s brother, Terence Floyd.

Wearing a face mask bearing a picture of his brother and a Yankees cap, he said, “I want to thank God.” He added: “It wasn’t his fault. It was his will. I thank God for you all showing love to my brother.”

The New York City mayor has taken heat from not only his community but lawmakers both left and right over his handling of the riots against police brutality that have ravaged the city for nearly a week.

On Tuesday, NY Gov. Andrew Cuomo called the mayor’s handling of riots a “disgrace” and said he has the power to “displace” de Blasio, though he won’t at this time.

“The NYPD and the mayor did not do their job last night, I believe that,” Cuomo said at the time. Cuomo said at a press conference that the mayor “underestimates” the scope and duration of the problem, suggesting he needs to deploy more police.

De Blasio imposed an 11 p.m. curfew to quell riots on Monday, but after another night of fires and looting moved up the curfew to 8 p.m. and extended it through Sunday night.

President Trump too slammed de Blasio for his refusal to bring in the National Guard.

“You have a liberal mayor [in Minneapolis] that frankly was having a lot of trouble and you have a very liberal mayor in New York [City] too and you notice that all of these places that have problems are not run by Republicans, they are run by liberal Democrats, so there is something into that philosophy,” Trump told  “The Brian Kilmeade Show.”

He said he saw a “lot of restraint from the N.Y.P.D. overall,” adding that if there was “anything that needs to be reviewed, it will be.”

Earlier Thursday de Blasio gave a press conference outside a city hospital after an officer was stabbed in the neck the night before in what police say was an unprovoked attack, sparking a gunfight that left two additional officers and the knife-wielding man wounded.