Violence returned to Paris on Saturday as the Yellow Vests protested for the 18th weekend.

Footage from TV news channels showed broken windows at stores as well as a ransacked restaurant on the Champs Elysees. A bank was set on fire near the iconic avenue, leading to 11 wounded in the building, including two police officers, AFP reported.

The so-called Yellow Vests, named after drivers’ safety jackets, started demonstrating around the country at the end of November. The protests were initially triggered by a planned increase in gasoline taxes, but the movement has morphed into a mixed bag of demands, from the cancellation of a lower speed limit on secondary roads to President Emmanuel Macron’s resignation.

Prime Minister Edouard Philippe met with police near the Champs Elysees toward the end of the day to thank them for their work. He described the situation as “extremely tense” and “unacceptable.”

“The acts committed today aren’t caused by protesters, but looters, incendiary individuals and criminals,” Philippe said in a tweet. “No cause can justify such violence.”

About 14,500 people took part in Yellow Vest protests across France on Saturday, compared with 7,000 a week ago, AFP reported, citing estimates from the interior ministry. The movement had seemed to be losing steam in the past few weeks amid the national debate initiative launched by the government of Macron, which allowed individuals and opposition parties to voice their discontent by putting forward political proposals to change the status-quo. That national debate came to an end on Friday.

Interior Minister Christophe Castaner earlier condemned the violence on Twitter, saying that masked “professionals of destruction and disorder” infiltrated the protests. Castaner urged police forces to give a firm response to the violence and a total of 121 people were arrested on Saturday. 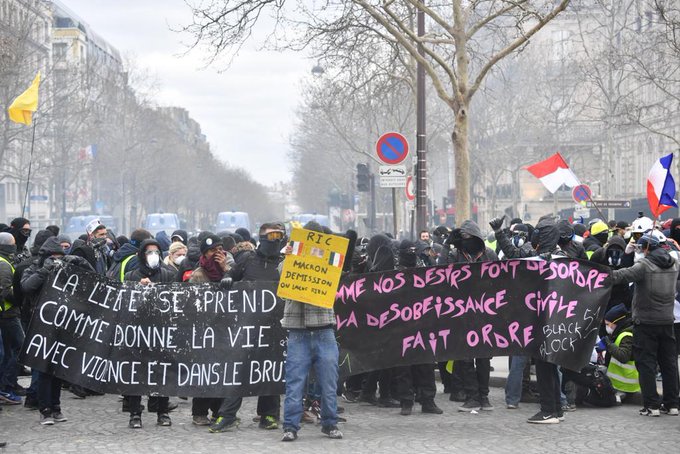 Store-front windows of jeweler Bulgari as well as fashion brands Boss and Lacoste were smashed, while the Fouquet’s restaurant was vandalized with graffiti saying “Sarko broke everything,” a reference to the former President Nicolas Sarkozy, who famously celebrated his 2007 presidential victory at the expensive eatery.

BFM reported that some stores on the avenue were also looted as up to 10,000 Yellow Vest protesters took to the streets in the French capital. Around 1,500 of these were “ultra-violent,” and ready to cause destruction, Castaner said.

The French capital was also the scene of parallel peaceful protests against climate change, this time mostly near the Opera, reports from news channels showed.

— With assistance by Geraldine Amiel