Why is France facing an upsurge in anti-Semitic attacks?

A spate of high-profile anti-Semitic incidents has shocked France, where officials say attacks against Jews rose by 74% last year – an alarming trend experts have linked to the spread of hate speech and the tension surrounding “Yellow Vest” protests.

During a cabinet meeting on Wednesday, French President Emmanuel Macrondenounced the “unacceptable increase” in anti-Semitic acts and hate speech, which he linked to the latest wave of demontrations against his government.

The incidents mark “a new turn of events linked to the movement”, Macron said, referring to the so-called “Yellow Vest” anti-government rallies that have roiled France over the past three months.

Yellow Vest demonstrators, who have staged often violent protests on consecutive weekends since late November, have come under scrutiny amid a string of racist and anti-Semitic incidents reported during their weekly rallies.

While many Yellow Vests have publically denounced anti-Semitism, some in the movement – a broad-based grassroots phenomenon with no single political bent – have expressed extreme views and adherence to conspiracy theories.

Last weekend several anti-Semitic incidents were reported in France, including swastikas drawn on portraits of the late Holocaust survivor and prominent politician Simone Veil, and a bagel shop sprayed with the word “Juden” (German for “Jews”) on its front window.

On Monday, municipal workers in the Paris suburb of Sainte-Genevieve-des-Bois found a tree planted in memory of the late young Jewish Ilam Halimi chopped down and a second one partly sawn.

Halimi was kidnapped and tortured for three weeks in 2006 by gang members demanding huge sums of money from his family, assuming he was rich because he was Jewish. He died on his way to hospital.

The total of registered anti-Semitic acts and threats rose to 541 in 2018 from 311, a surge of 74 percent after two years of decrease, French interior minister Christophe Castaner announced on Monday while attending a ceremony at the Halimi memorial.

France is home to the world’s largest Jewish population outside Israel and the United States.

Although anti-Semitism is not new to the country, “a new threshold has been set: these acts are growingly extreme and violent”, Pierre Tartakowsky, honorary president of the French Human Rights League (LDH), told FRANCE 24.

According to Frederic Potier, a French government official in charge of fighting anti-Semitism, racism and anti-gay discrimination, “what is new and what is feeding this anti-Semitic fever […] is the resurgence of a far right with really violent speech and acts”.

Until now, most of the anti-Semitism in France was derived from Islamism and linked to the Israeli-Palestinian conflict, the French official added.

But why such radicalisation now?

A ‘breeding ground’ for hate speech and violence

Delphine Horvilleur: ‘Anti-Semitism is always a prelude to a general violence’

“If a society is seen as stable, fair and democratic, its members would never attack an MP or destroy everything during demonstrations,” added Tartakowsky, who stands close to the Communist Party. The growing tension on all sides of the political spectrum “favours a radicalization of acts, in a phenomenon of rising irritation”, he said.

Since the beginning of the Yellow Vest movement, around 50 MPs have been attacked or threatened, including with death threats and gunshots. Most of them were members of Macron’s La République en Marche (LREM) party, though some were targeted for being black or women.

Violent acts are also fuelled by “an enabling context”, argues sociologist Michael Wievorka, coupled with a “liberation of hate speech – mostly on the internet but also in public”.

According to Vincent Duclert, a historian at the Paris-based School for Advanced Studies in Social Sciences (EHESS), anti-Semitism has also found “a breeding ground inside the Yellow Vest movement because it is violent”.

On the fringes of the tenth consecutive weekend of protests, on January 19, various anti-Semitic groups, including prominent anti-Jewish figure Alain Soral, tried to coordinate and “goad the Yellow Vests”.

Three weeks later, a graffiti spraying “Macron Jew’s Bitch” was found in the heart of Paris after another day of protests. 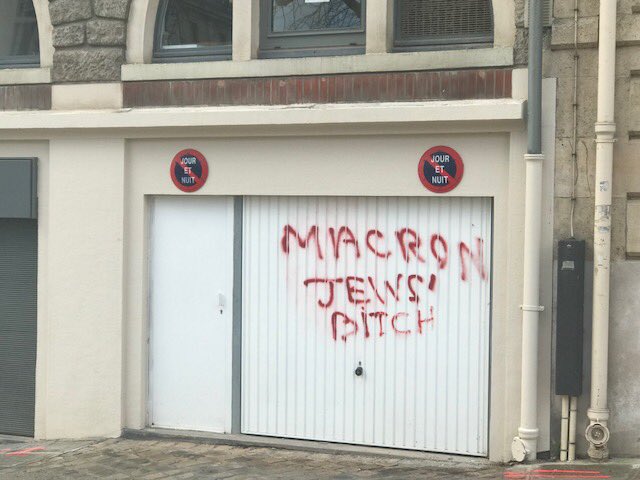 Anti-Semitism on the rise in Germany, Italy and US

But the increase in hate speech “is not particular to France, even though it has been really strong lately here: it is everywhere”, Horvilleur told FRANCE 24.

In Germany, anti-Semitic offences rose almost 10 percent in 2018, with violent attacks up more than 60 percent. Police recorded a total of 1,646 offences motivated by hatred of Jews, including 62 violent offences that left 43 people injured. In comparison, there were 37 physical attacks in 2017.

According to Potier, the French government official, the same figures also surged by “66 percent in Italy last year, and around 50 percent in the US.”

“Any act of that kind is extremely worrying and horrendous and we are at a peak of hate crimes. But this peak is less important than those of 2014, 2009 or 2004, when there were 800 acts of anti-Semitism in France,” he explained.

However, “people are now being killed simply because they are Jewish,” Tartakowsky added, pointing to recent terrorist attacks on French soil, in which jihadists have targeted the Jewish community.

In 2012, Islamist Mohammed Merah shot dead a rabbi and three children at a Jewish school in Toulouse. Three years later, gunman Amedy Coulibaly, who claimed allegiance to the Islamic State group, killed four people at a kosher supermarket in Paris.

Horvilleur warned that the rising attacks are alarming not only for the Jewish community, but for the wider population too.

“We have known this for centuries, anti-Semitism is always a prelude to a general outbreak of violence: when there are attacks against Jews, it always means that the rest of the population is going to be attacked very soon,” she explained.

The Jewish community is not the only target of hate crimes, with all communities and religions, including Roman Catholics, coming under threat. Last week, at least five churches were desecrated around the country, according to the police.

“Muslims have also been largely targeted”, Tartakowsky added. “But unlike Christians, Muslim communities rarely press charges in such cases, so we don’t have a precise figure concerning them. The same is true of Romani people.”