California will extend its mask mandate for indoor public spaces for another month as an unprecedented wave of coronavirus infections spawned by the highly transmissible Omicron variant continues to wash over the state.

The crush of cases is also sparking fresh concerns about the state’s hospitals, which are contending with both a flood of new patients and rising infections among their sorely needed staff.

While COVID-19 hospitalizations are a fraction of what they were last year, overall hospitalizations for all reasons are quite high. Many hospitals across Southern California report being strained, in part because few employees are available due to coronavirus infections, and because demand for non-COVID care is much higher this winter.

In both L.A. and Orange counties, it’s taking longer to offload patients from ambulances into hospitals; in L.A. County, 911 response times have worsened. Across the region, some hospitals have been forced to place on hold or reschedule some surgeries. The staffing shortage is considered by some in San Diego County as worse than during last winter’s surge.

Since Omicron can spread so readily, officials say wearing masks adds a much-needed layer of protection. But the quality of the mask also matters, and officials have been warning that old, loose fitting cloth masks alone with gaps around the mouth are too risky to use in the Omicron era.

On Wednesday, Los Angeles County officials announced that employers will be required to provide well-fitting medical grade masks, surgical masks or respirators — such as N95s or KN95s — to employees who work indoors in close contact with others.

Employers are required to do so as soon as possible, but no later than Jan. 17, officials said.

“Given the explosive spread of the virus, activities that put us in close contact with many other people now have an increased risk,” said county Public Health Director Barbara Ferrer. “As such, everyone needs to be sensible about how to protect themselves and those they love by layering on protections whenever around non-household members.”

The statewide mask order was reinstituted in mid-December and was originally set to be reevaluated Jan. 15. But given the sharp rise in infections and hospitalizations, it will be in place through at least Feb. 15, said Dr. Mark Ghaly, California’s health and human services secretary.

The mandate applies to residents regardless of their vaccination status. Exemptions are in place for those younger than 2, who have certain medical conditions or are hearing-impaired, and people “for whom wearing a mask would create a risk to the person related to their work, as determined by local, state or federal regulators or workplace safety guidelines.”

A number of California counties — including Los Angeles, Ventura, Sacramento and most of the San Francisco Bay Area — have their own indoor mask mandates on the books that, unlike the state’s, have no specified end dates. The statewide order applied to counties that didn’t already have local indoor mask mandates in place, such as San Diego, Orange, Riverside and San Bernardino counties.

During a briefing call with reporters, Ghaly expressed both caution about the pandemic’s recent trends and confidence in the state’s ability to tackle the new wave.

“Our level of preparedness and the tools we have in our toolbox are much more significant than we had before,” he said Wednesday.

California has reported an average of 54,695 new coronavirus cases per day over the last week, the highest rolling total in the nearly two-year pandemic, according to data compiled by The Times. During last winter’s surge, California peaked at about 46,000 new cases a day.

That metric may be warped by data delays over the New Year’s holiday weekend and the subsequent batch of several days’ worth of numbers reported Tuesday. But the trendline has been near-vertical lately, illustrating how suddenly and starkly transmission has surged statewide. 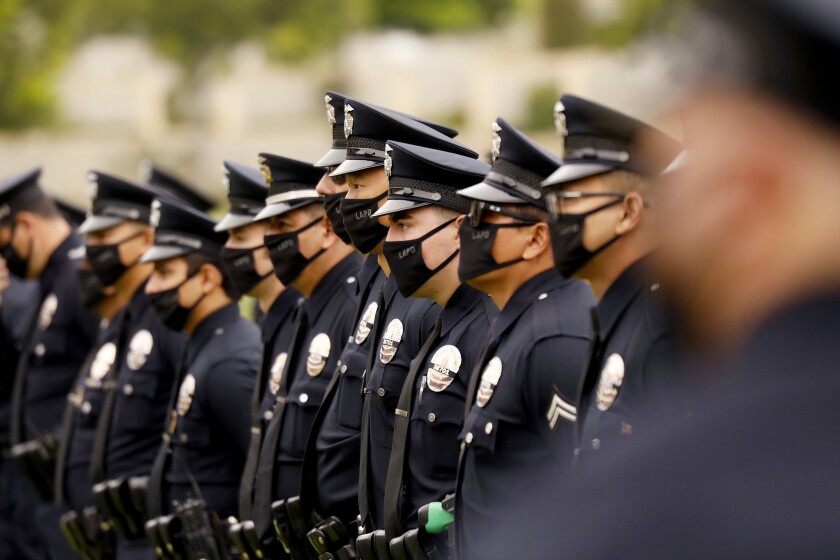 The share of coronavirus tests coming back positive also has rocketed to record levels — reaching a seven-day rate of 21.3% as of Wednesday, according to the California Department of Public Health.

Despite the worsening metrics, Ghaly said California is not considering reimposing the sort of economic restrictions enacted at the start of the pandemic. Tools such as masking, testing and vaccines, he said, still provide ample protection.

“We are not discussing business closures or further limitations on businesses or other sectors of our economy and for the schools,” Ghaly said.

“We also know that the level of immunity that we’ve created primarily due to vaccines has allowed us to sort of treat Omicron as, frankly, a little less virulent, a little less likely to cause severe disease, because we have high levels of immunity from so many Californians getting vaccinated, and those who’ve gotten prior infection,” Ghaly said. “We can manage the disease burden that we’re seeing in a way that we weren’t able to a year ago.”

While some of the recent cases are likely the work of the still-circulating Delta variant, officials across the state and nation have said it appears Omicron has rapidly outmuscled the other once-dominant variant.

The Centers for Disease Control and Prevention now estimates that Omicron represents about 95% of cases nationwide, with Delta accounting for the rest.

“The coming weeks are going to be challenging. We’re going to see cases continue to rise because Omicron is a very transmissible variant,” said Jeff Zients, the White House coronavirus response coordinator.

So far, though, the number of people being hospitalized with COVID-19 has not risen at the same staggering rate as cases.