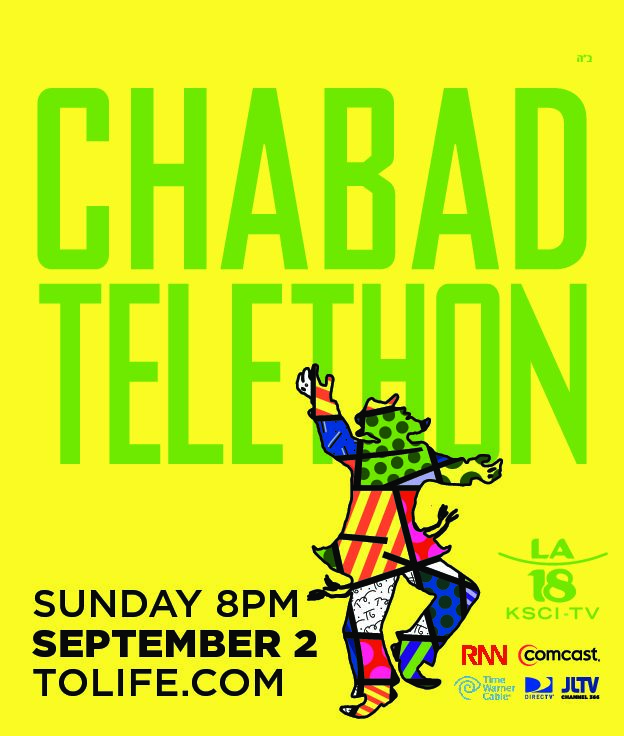 The Chabad “L’Chaim To Life” Telethon is the largest global expression of joy, Judaism and good deeds being broadcast on public media.  This year marks its 38th anniversary and it promises to be the most exciting Telethon yet with an evening featuring Jon Voight, Larry King and many other celebrities.

Over the last 38 years, Chabad Lubavitch West Coast has forged a unique partnership with actors, musicians, athletes, civic leaders and corporate executives. Featuring star-studded lineups and the endearing “dancing rabbis,”, the Telethons are special events that have proven consistently popular with audiences.

Funds raised by the Telethon go to support the vast range of programs Chabad directs which include: Education, Summer Camps, Youth Programs, children with special needs, Drug and Alcohol Rehabilitation, Community Outreach, Crisis Intervention, and AskMoses.com. Chabad on the West Coast has over 200 centers serving communities throughout California and Nevada comprising the largest network of educational and nonsectarian social services under Jewish auspices on the West Coast.

People of all backgrounds and beliefs benefit from Chabad’s services. “Whether it’s a child who needs a nurturing education, a senior citizen who needs some companionship, or an addict who needs a second chance, there are so many members of the community who are in desperate need,” said Rabbi Cunin, West Coast Director of Chabad.   “Chabad has been blessed by caring and compassionate supporters, and the Telethon is a way to reach so many in a short time to inspire them to come together for dancing, singing, and helping those less fortunate.”

Rabbi Bochner Sees So Much Pain Daily, Now Is The Time To Send Him 10,000 Messages Of Support In Honor Of 10,000 Babies Born!

Phyllis Shallman -How To Build Credit When You Are Young