The Chief Rabbinate has stripped a meatpacking plant of kosher status after finding numerous prohibited cuts of beef on the premises.

A meatpacking plant in the northern city of Nahariya has been closed down by the Chief Rabbinate after being found in violation of numerous kashrut (Jewish dietary law) violations.

According to a statement from the Rabbinate, a routine inspection by the Rabbinate had found T-bone cuts of lamb had not been properly cleaned of prohibited parts. The inspector brought the meat to the attention of two experts in the field, who confirmed the suspicions that the meat in question was prohibited. 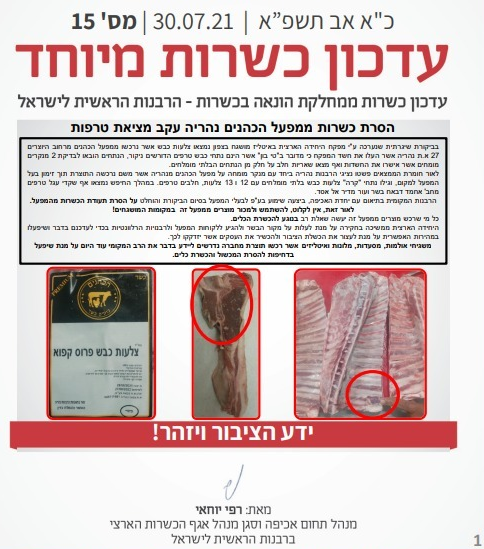 Representatives of the Rabbinate, along with further kashrut experts and with the assistance of the police, raided the Nahariya plant that had sold the meat shortly thereafter. The Rabbinate statement reported that more such prohibited cuts of meat were discovered on the premises. Several prohibited cuts of beef were reported as well.

Additionally, the statement claims that quantities of prohibited meat were found from uncertified companies in the Arab-majority city of Dir al-Asad.

Immediate measures were taken against the plant, including the immediate disqualification of the plant’s kosher certification and a disciplinary hearing for the owners and operators of the plant. The Rabbinate has warned the public to consult their local Rabbinic authorities about what to do with any food or utensils used with the prohibited meat; numerous restaurants and institutional kitchens have reported that they were required to throw out large quantities of food and ritually purify all meat dishes.

The Rabbinate urges the public to contact their local rabbi immediately, should any further food from that plant, or utensils used with it, be discovered.

COVID Has Turned South Florida Into A Promised Land For Orthodox...