Republican leader Kevin McCarthy:  “New York’s mayor appears to be discriminating against Jewish funerals, schools, and playgrounds. If Americans can protest, families should have access to their neighborhood parks.”

After New York Jewish Community elected officials defied New York City Mayor Bill de Blasio by forcing open two more community parks, the Mayor pushed back in a press conference deploring those who “take the law into their own hands.”

New York State Senator Simcha Felder Monday tweeted: “We’ve asked nicely and waited patiently. We’ve made every logical argument. The people have spoken and they’re running out of patience. If the NYC Mayor won’t open ALL our playgrounds, Simcha Eichenstein, Kalman Yeger, and I will cut the locks open ourselves.”

The three then arrived at a park on Avenue L and East 18 joined by Heshy Tischler to oversee as a man forced the lock and opened the playground. The group repeated the action in a Boro Park park.

At a press conference this morning, NYC Mayor de Blasio said “We’re not going to allow people to take the law into their own hands. It just doesn’t work. So people are not allowed to open up a playground that is not yet available to the public.”

On Monday Tischler cut the locks at the Middleton Playground (Lynch Park) in Williamsburg, and the Bedford Playground on Bedford Ave. and South 9th Street, after the NYC Parks Department welded the playgrounds shut.

Republican leader Kevin McCarthy wrote “Total double standard; New York’s mayor appears to be discriminating against Jewish funerals, schools, and playgrounds in enforcing his coronavirus shutdown. If Americans can protest, families should have access to their neighborhood parks. 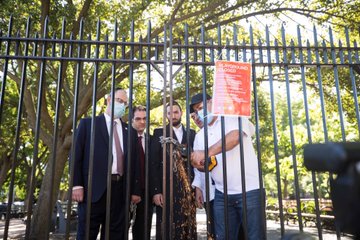 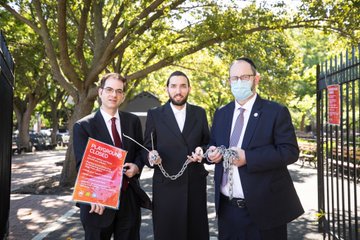 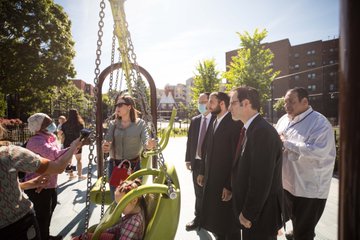 CDC to Meet Over Cases of Heart Issues After Vaccines

CDC to Meet Over Cases of Heart Issues After Vaccines