Los Angeles County on Wednesday reported its highest daily count of coronavirus infections since Aug. 22, highlighting the continued dangers of the virus even as more businesses are opening up.

Health officials have been warning that another coronavirus wave is possible this fall even as numbers of new cases and deaths have been declining since a serious summer spike.

Los Angeles County has lagged behind other parts of California in reopening because of its continued high numbers of new cases and deaths. But on Wednesday, indoor shopping centers reopened for the first time in months, with limited capacity.

The doors swung open to disturbing news: Public Health Director Barbara Ferrer announced 1,645 new cases and 30 additional deaths in the county. It’s unclear whether Wednesday’s count signifies a trend or is a one-off linked to a backlog of cases.

“While one day of a high number of cases does not indicate a trend, this is something we need to watch closely,” Ferrer said.

In recent weeks, the county has repeatedly reported fewer than 800 daily hospitalizations and fewer than 1,000 daily coronavirus cases. And although the average rate of tests coming back positive has decreased from a summer spike and hit its lowest number since the pandemic began, officials have warned that an ongoing incremental increase in daily case counts could pose a risk of increased transmission.

The numbers underscore the delicate balancing act facing officials, who are trying to reopen the economy without an increase in cases. That has caused frustration among some businesses.

For example, Gov. Gavin Newsom on Wednesday said theme parks such as Disneyland must remain closed despite intense pressure to reopen.

This is the ideal de-stress destination for Covid-weary, vacation-starved Angelenos.

“We’re going to be led by a health-first framework, and we’re going to be stubborn about it,” the governor told reporters. “We don’t anticipate in the immediate term any of these larger theme parks opening until we see more stability in terms of the data.”

County officials reported that the state’s new health equity metric — the positivity rate of a county’s lowest quartile based on the California Healthy Places index, used to ensure that communities disproportionately affected by the virus progress in step with the county as a whole — did not prevent the county from moving forward. The seven-day average positivity rate for L.A. County is 2.8%. For those in the lowest-resourced areas, the number is 4.6%. Both numbers are considered low and would place the county in Tier 3 of reopening if not for the high daily case count.

L.A. County, like others throughout the state, will face a test of time in its ability to maintain a low infection count as it continues to reopen more sectors and expand capacity at businesses. 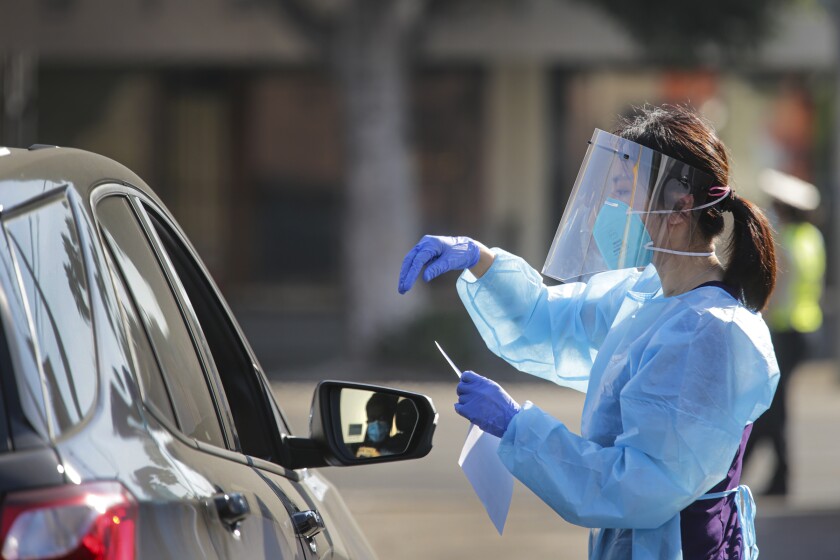 The county has toggled between Tiers 1 and 2 — the purple and red tiers, indicating widespread and substantial risk of transmission of the disease. Though its positivity rate has fallen below 3% — the lowest since the beginning of the outbreak — the number of positive cases per 100,000 residents is still too high to progress on the state’s reopening blueprint.

The latest reopening follows those of nail salons, card rooms, breweries, wineries, malls and playgrounds, which were approved for reopening over the last 10 days.

Any resurgence in activity poses a risk of transmission. And counties that have progressed on the reopening plan can still move backward if their numbers spike. Shasta and Tehama counties regressed Tuesday — the first two in the state to be sent back a level after the reopening strategy launched more than a month ago.

Report: 9 Of The 10 Worst Cities For First-Time Home Buyers Are In California

Report: 9 Of The 10 Worst Cities For First-Time Home Buyers...