With coronavirus cases and COVID-19 deaths surging at an alarming rate, Los Angeles County officials Tuesday began to outline a new limited Safer at Home order aimed at slowing the virus spread while sticking with an outdoor dining ban amid a growing outcry.

The new restrictions are looking increasingly likely as daily coronavirus infections spike to unprecedented levels, increasing stress on hospitals amid concern more people will be infected during the Thanksgiving holiday. But it also appears that a new stay-at-home order that had been suggested as a possibility last week would fall far short of the one imposed during the first months of the pandemic in the spring.

The March order closed all but essential businesses and left many people at home except for trips to such places as supermarkets and medical offices. But officials suggested Tuesday the new rules would allow many businesses to remain open but with limited customer capacity.

“We are not completely shutting down everything,” said Los Angeles County Supervisor Hilda Solis.

“Nonessential businesses will be very much open; gyms will be open outdoors; zoos will be open; hair salons; mini-golf and go-karts will be open with reduced capacity,” supervisor Janice Hahn said.

The proposed directives are all designed to keep people in their homes as much as possible, reduce capacity at sites where people from different households interact with each other, and curtail some nonessential activities.

Child-care and day care, schools and day camps that have opened under current protocols would be able to remain open as is the case under existing rules, with one new requirement: an ordered closure for 14 days should an outbreak occur, which is defined as three or more cases over a two-week period.

Activities that can continue include professional sports without spectators and outdoor youth sports for conditioning and skill building only; tournaments and competitions have not been allowed to resume.

And the county would still need to abide by the state’s limited overnight stay-at-home order, which says nonessential activities outside the home with members of other households must end between 10 p.m. and 5 a.m.

It was only a week ago that county officials raised the prospect of a new stay-at-home order, which they said would only generally allow essential workers and people securing essential services to leave their homes.

But since then, the Los Angeles County director of public health, Barbara Ferrer, said a sweeping shutdown is not necessary because the county has more tools to handle COVID-19 compared with the spring, when less was known about the disease. “We have much more capacity on testing now, which allows us to do a better job quickly identifying people who are positive,” Ferrer said.

“We’ve learned some things from that previous time,” said Dr. Muntu Davis, the L.A. County health officer. “There were certain things that we didn’t have in place, in terms of universal face covering.”

Officials did not elaborate on the timing of the new order. But conditions were continuing to deteriorate. On Tuesday, 45 additional deaths were reported in L.A. County, the highest single-day total since early September. The deaths of L.A. County residents are now reported at triple the daily rate they were on Nov. 3.

Hospitalizations were also climbing at rapid rates, with nearly 1,700 people in the hospital with COVID-19 on Tuesday, up from nearly 800 on Oct. 23. Officials warned that unless county residents change their behavior on a widespread scale, the existing supply of staffed hospital beds will soon be exhausted. 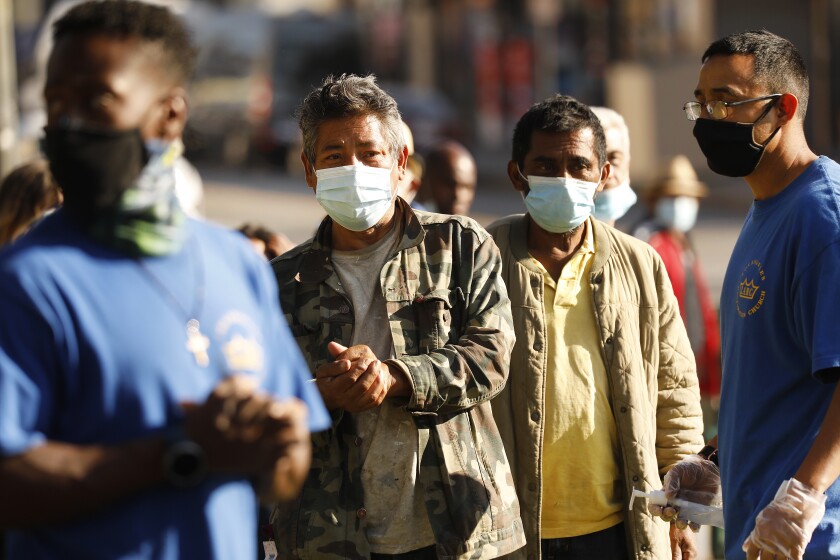 While L.A. County has been particularly hard hit, the state as a whole is wrestling with an avalanche of coronavirus cases, and officials expect the number of daily deaths will become even worse than the summer peak.

“Certainly, the numbers of deaths will likely go up. Just as we are exceeding our highest-ever numbers of cases, and beginning to see our hospital systems pressed with COVID beyond where they’ve ever been pressed before, the idea that the numbers of deaths could exceed where we’ve been before is also real and true,” Dr. Mark Ghaly, the California health and human services secretary, said Tuesday.

The state recorded 20,654 cases Monday, shattering the previous single-day record of 13,412 infections, according to an independent Times survey of California counties. L.A. County recorded nearly 6,200 cases Monday, which was also a daily record, and more than 3,700 on Tuesday.

“We are truly in the midst of a surge here in California,” Ghaly said.

Statewide, the daily average of new coronavirus cases, calculated over a seven-day period, more than doubled in the past two weeks, a Times analysis found. Most of California’s counties also reported the same doubling or worse.

Imperial County has seen its daily average of coronavirus cases nearly quadruple in the last two weeks. That county has been forced to erect a 50-bed tent to help deal with a surge in COVID-19 patients and has requested dozens of additional healthcare workers, including 33 intensive care unit nurses, three lab scientists, 21 emergency room nurses and six respiratory therapists, officials said last week.

Imperial County has also seen its coronavirus test positivity rate double in the course of a month, from 10.5% to 23.8%.

Between Nov. 1 and Monday, the number of people hospitalized with COVID-19 statewide has more than doubled, Ghaly said, from about 2,500 to more than 5,800. Some hospitals’ intensive care units “are already being pressed to a significant degree,” he added.