Home News California Southern California is driving record COVID-19 deaths with no signs of letting...
Facebook
Twitter
Pinterest
WhatsApp
By RONG-GONG LIN II, LUKE MONEY, MAURA DOLAN
DEC. 10, 2020
SAN FRANCISCO —  Deaths from COVID-19 in California are reaching record levels this week, a grim sign of how even advances in medical care and a younger demographic of those infected are no match for the relentless spread of the coronavirus.
Southern California and the Central Valley are by far the state’s biggest contributors of total deaths in the last week. Of nearly 950 deaths reported in California in the last week, a Times analysis shows that more than 300 fatalities were reported in L.A. County, followed by nearly 80 in San Bernardino County, about 70 each in Riverside and San Diego counties and nearly 60 in Orange County.

Deaths were also rising in Northern California, but not at the numbers seen in the Southland.

California this week broke its single-day record for COVID-19 deaths — 219 on Tuesday. The state is now averaging 135 deaths a day over a seven-day period, coming close to the all-time high of 144 set in August. The state has averaged 146.1 new deaths daily over the last week, a new all-time high.

Health officials expect deaths to continue spiking in the coming weeks as it’s becoming clear many people got infected during the Thanksgiving holiday.

The coronavirus is now infecting mostly younger adults. But once the virus spreads into older people — those age 50 or higher — the likelihood of death is much higher.

Just a few weeks ago, the chance of getting COVID-19 was relatively rare, like the chance of getting soaked while dining outside when there’s just a light sprinkle, said Dr. Robert Kim-Farley, medical epidemiologist and infectious diseases expert at the UCLA Fielding School of Public Health. Now, the virus is so widespread, the situation is more like a heavy storm.

“If it’s a downpour — because the whole community has widespread transmission — if you’re going to be outside, you’re going to get wet. You could get the virus,” Kim-Farley said.

In California, there was some optimism earlier this fall that even with another surge, deaths could remain under control because doctors have gotten better at treating COVID-19 patients and there has been less spread in institutions such as nursing homes. And perhaps people had become used to wearing masks and staying physically distant until a vaccine would arrive, health officials hoped.

It is true that a patient entering a hospital now probably has a better chance for survival than earlier in the pandemic. Doctors have learned, when possible, to avoid placing patients on mechanical ventilators and use alternative ways to get more oxygen into the bloodstream; place people on their bellies to make it easier for them to breathe and give patients steroid treatments.

But COVID-19 is now so widespread that the overall chance of getting infected, and therefore being one of the unlucky 12% to need hospitalization, is now worse than ever.

“The more transmission you have, the more people are ending up in the hospital, and … the more deaths we’re going to witness,” said L.A. County Public Health Director Barbara Ferrer.

It’s now clear that some Californians are weary of wearing masks and staying physically distant, setting the stage for a terrible autumn surge of disease.

“This is the surge that we all expected when we first got wind of this thing in the spring,” said Dr. Shruti Gohil, associate medical director of epidemiology and infection prevention at UC Irvine. As a result, activities that were relatively less risky just a few weeks ago are now far more dangerous.

L.A. County officials now estimate about 1 in 140 L.A. County residents are in the community and contagious with the virus — far more common than in late September, when just 1 in 880 were contagious.

Daily deaths are expected to continue climbing for many weeks to come. Every infected person in L.A. County is on average infecting 1.14 other people, one of the highest transmission rates since the first weeks of the pandemic.

The boom in daily deaths that resulted from virus transmission over Thanksgiving won’t become apparent until January, a projection based on how past waves have behaved.

“I do anticipate that the deaths will continue to increase in the weeks to come,” said Dr. Christina Ghaly, the L.A. County director of health services. “Sadly, patients often have very long hospital [stays], and are just not able to recover.”

The virus can cause a host of serious complications, hijacking other cells and causing inflammation and destruction of the lungs, which is known as pneumonia, drowning the organs in fluid. The virus can cause shortness of breath and low levels of oxygen in the blood, and result in an inability to breathe and the failure of multiple organs.

More than 8,000 L.A. County residents have died of COVID-19 — a fact that nearly brought Ferrer to tears during a briefing Wednesday.

“Over 8,000 people who were beloved members of their families are not coming back,” she said, her voice choking. “And their deaths are an incalculable loss to their friends and their family, as well as our community.”

The biggest concern now among health officials is the crowded state of hospital intensive care units.

Some ICUs across the state, from Silicon Valley to the Central Valley, are already reporting 0% available capacity. Across L.A. County, available ICU capacity was at 11.8%.

“Let me be clear: 11.8% ICU capacity is dangerously low,” said L.A. County Supervisor Hilda Solis. “Already we have seen some of our hospitals have to divert ambulances overnight to other hospitals.”

“Given that we’re just now seeing the hospitalizations that resulted from the recent Thanksgiving holiday, we anticipate that the number will continue to grow over the next few weeks, with potentially up to 700 new daily COVID hospitalizations in just one week from now,” Ghaly said.

In L.A. County, hospitals have been addressing increased demands for staffed hospital beds by calling in for help from other areas of the hospital system, forcing cancellations of scheduled surgeries and outpatient visits; discharging patients as quickly as possible and temporarily diverting ambulances with certain types of patients to other hospitals, which can only be done in two-hour time periods. Patients suffering trauma, heart attacks and strokes cannot be diverted elsewhere.

On Tuesday, 77% of hospitals in L.A. County were diverting patients at some point during the day; normally at this time of year, only 10% to 15% of hospitals would be on such a diversion.

Other measures hospitals can do involve discharging COVID-19 patients home and setting them up to receive oxygen treatments there, followed up daily by specially trained workers.

By that point, there will be 36 million Californians subject to the regional stay-at-home order, covering 92% of California’s population and 41 of the state’s 58 counties.

San Francisco officials said they will run out of intensive care beds in 17 days if the current rate of infection remains stable. 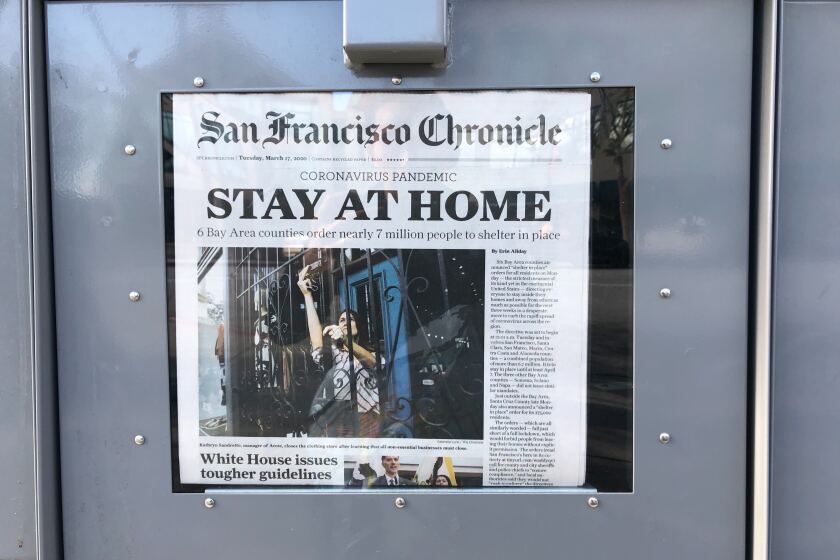 Health director Dr. Grant Colfax urged residents to stay home, saying that avoiding contact with others now was “probably the most important message” he has tried to impart since the COVID-19 pandemic began.

“To be blunt, we have one chance to turn this serious surge around, and that chance is right now,” he said. “But our window is narrowing and closing fast.”