IN what is surely a modern miracle, all 12 trapped boys and their coach have been rescued from the flooded caves.

ALL 12 boys and their coach from the Wild Boars soccer team are now free from the Thai cave that has been their prison for more than two weeks, in what has been called a modern miracle.

The final boy emerged into daylight on Tuesday at around 6pm local time (9pm AEST).

Nineteen divers helped escort the final five members of the group out of Tham Luang cave, in the toughest rescue operation of the past few days.

The youngest of the group, aged just 11, was one of the last to reach the surface.

The final boys were evacuated by ambulance and helicopter to join their teammates at a Chiang Rai hospital. Picture: AFP Photo / Lillian SuwanrumphaSource:AFP

All 12 boys and their coach have now been rescued from a cave in Mae Sai, northern Thailand, after the last and toughest part of the mission.Source:AFP

The four boys rescued on Tuesday have now been transported by ambulance and helicopter to a hospital in Chiang Rai province in northern Thailand, where they will join their teammates.

The coach has also left the cave, with a doctor and four Thai Navy SEALs following behind.

The navy posted on their Facebook page: “We are not sure if this is a miracle, a science, or what. All the thirteen Wild Boars are now out of the cave.”

The first four boys emerged on Sunday, followed by another four on Monday.

The Australian’s Amanda Hodge has reported that Adelaide anaesthetist Richard Harris has continued to play a central role in the rescue, diving each day all the way to where the boys were trapped to check their condition before clearing them to dive.

“He only leaves the cave when the last boy is rescued each day,” she said.

It’s an extraordinary end to a mission many said was impossible. To rescue a group of children trapped 4kms underground and teach them to dive their way out of flooded caves and tunnels. The constant threat of rain meant the situation in the Tham Luang Nang Non cave system could have got far worse.

And yet, the impossible was achieved.

There must have been dark times when the 12 members of the Wild Boars soccer team, holed up in the dank and pitch black surroundings of the caves, wondered if they would ever be found. Or if the steadily rising waters would slowly, but ever so surely, engulf them all.

Yet, 17 days after they first entered the notorious natural tunnel system in northern Thailand, after battling loneliness and the cold and the not easy task of learning how to dive, the outcome no one dared to dream of has occurred — all the boys and their coach are back out in the open, seemingly only slightly worse for wear given their ordeal.

Earlier on Tuesday, the SEALs posted a message that said: “Tonight, all the Wild Boars will be reunited.” 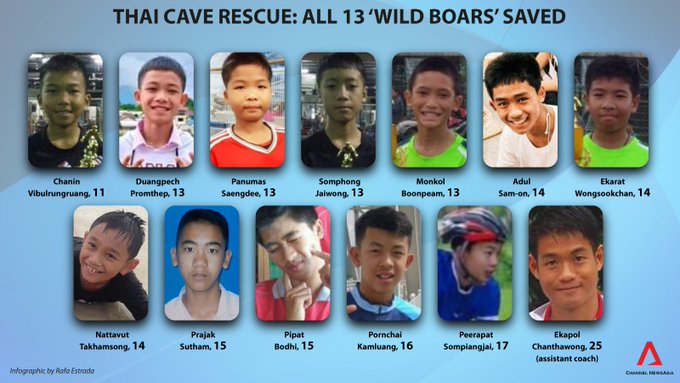 An impressive feat of International cooperation, professionalism and dedication. All 12 boys and their football coach have been brought safely out of # Thamluangcave. Just amazing! How rare to have such uplifting news. Hoping to hear Thai divers who stayed with them are also out 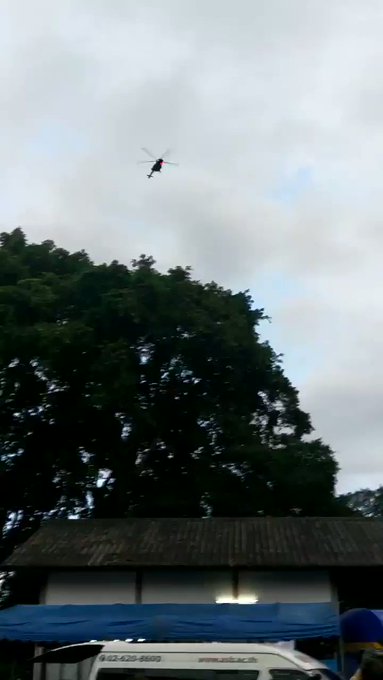 However, Mr Narongsak sounded a note of caution, telling reporters that the third mission was more perilous than the previous two. Not four, but nine people needed to make it out this time: four boys, the coach, a doctor and three Navy SEALs.

And the death of military diver Saman Kunan on Friday only underscored the huge risks the boys faced.

But out they came, one by one. At 4.06pm local time (7.06pm AEST) the ninth boy emerged, followed around half an hour later by the tenth and then at 5.15pm by the 11th. The 12th emerged later. The team’s coach came last.

Aged between 11 and 16, the BBC has named the people trapped in the caves as:

TRAPPED
The 12 schoolboys’ awful adventure began uneventfully enough. All part of a soccer team called the Wild Boars, the trip into the caves was part of a “rite of passage”. But it quickly turned into a nightmare. Some of the local boys knew the Tham Luang caves, Thailand’s longest, and had explored them. But they were notorious nonetheless due to the challenging landscape within including slippery rocks and cliffs with stark drop-offs shrouded in darkness

Ake, the young coach, was said to be keeping the boys on a strict training schedule to keep them fit and bond the teammates.

On June 23, the group set off on a 45-minute bike ride from their school, close to the border town of Mae Sai, to the cave.

It wasn’t until 7pm that night, when the team failed to return, that the Wild Boars’ 37-year-old head coach, Nopparat Kathawong, realised something had gone terribly wrong.

Thai rescue teams arrange water pumping system at the entrance to the flooded cave complex where 12 boys and their soccer coach were trapped. Picture: Royal Thai Navy via AP.Source:AP

NOWHERE TO BE SEEN

He retraced their step and to his horror found the boys’ bikes and bags close to the entrance but the team were nowhere to be seen.

Heavy rain had filled the tunnels with water and cut off the team’s exit route. They had no choice but to keep forging ahead, along elevated slopes, where they found a dry ledge 4km into the cave that would ultimately make their rescue even more treacherous, leaving them stranded for days.

That triggered an international rescue operation and on July 2, more than a week after they went missing, two divers found the group alive, far from the cave’s entrance and huddled on a 10sq m ledge.

The coach, Mr Ekapol, reportedly led the boys in group meditation to calm their nerves. But it’s likely that for much of that week, the boys would have been in pitch darkness with no idea if they would ever be found.

Thanaporn Promthep, mother of one of the 12 missing boys, displays an image of her son Duangpetch, nicknamed “Dom” (with light) and his football coach Ekkapol Chantawong (right), after hearing the news the group was found. Picture: AFP PHOTO / LILLIAN SUWANRUMPHA.Source:AFP

HOW TO GET TO THE TEAM

Initially, the idea of the boys retracing their steps through the now flooded cave was firmly in the category of last resort. Perhaps there was another route or a way in could be drilled through the hard rock? There was even a suggestion the boys and their coach might have to remain in place for months, until the monsoonal rains subsided and the system emptied of water.

While the Thai authorities, now supplemented by an international cast of rescue experts and divers — including from Australia — decided how to proceed, the boys were busy being sent supplies to keep them warm, fed and entertained.

They passed the time writing letters to their parents. In one, Duangpetch “Dom” Phromthep, wrote; “I’m fine but it’s a little bit cold. Don’t worry and don’t forget my birthday.”

Another, Ekarat “Bew” Wongsukchan, simply penned: “Mum and Dad, don’t worry that I (am) missing for two weeks. I will help you at the shop soon.”

A letter from one of the boys that was handed to British divers on July 6. Picture: Thai Navy SEALs via Getty Images.Source:Getty Images

But crunch time was coming. A break in the clouds was welcome but should the rains return it could easily see water levels in the cave engulf the stranded team no matter how much they tried to pump the tide out.

The massively risky decision was taken to lead the boys, none of who could dive, few of who could swim, through the water to the surface.

Rescuers spent days trying to teach them basic diving and breathing skills. To make thing easier they would have full face masks attached during the swim, not the usual regulator which is easy to knock off which could lead the novice divers to panic. 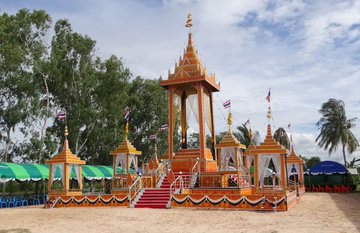 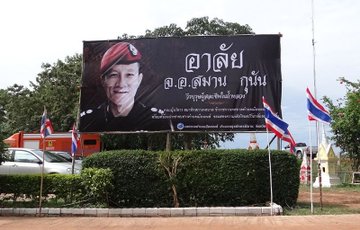 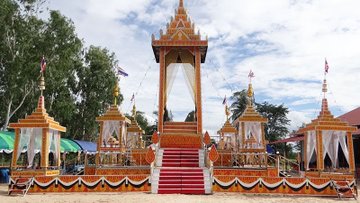 The first, nearly one kilometre long section from where the boys had been huddling in darkness, is believed to be the most difficult and required a long dive and crawling through mud and debris. One crevice was just 38cms wide.

“The hole is really small, I have to take off my air tank to crawl through it,” a 25-year-old Thai Navy SEAL who declined to be named, told Reuters before the first rescue attempt. “As I do, I feel the edges of the hole on both my back and chest.”

But it was a risk the multinational team felt they had no choice but to take.

Thirteen divers entered the cave at 10am Sunday local time (1pm AEST) — some heading straight for the trapped group and others taking up stations along the string of flooded chambers.

Ten rescuers headed to the boys in chamber nine and to the junction at chamber six, while the others headed to support positions shortly afterwards.

Each boy had to wear a full scuba mask, wetsuit, boots and a helmet as they made their way through the dark and perilous passageways.

They were strapped to the leading diver by a tether and dragged along by their “buddy”, who carried two tanks and shared oxygen with the boy as they followed a submerged rope.

A second diver followed the pair through the cold water and airless chambers that have already claimed one life.

The most difficult part of the trek was known as the “choke point”. Close to where the boys were marooned, the divers and their charge would head beneath the water and ascend as the walls closed in around them to little more than the width of a ruler. During this part of the course the children would have to swim alone, the space was so tight.

Thai police and military personnel use umbrellas to shield a boy rescued from the caves. Picture: AFP PHOTO / LILLIAN SUWANRUMPHASource:AFP

Around 2.4 kms from where they began, they reached a rescue base, a key milestone on their journey to freedom.

Upon leaving the cave each boy was rushed by ambulance or helicopter to a hospital in Chiang Rai, the regional capital.

During a press conference at the hospital on Tuesday, a health official said all of the boys are suffering ailments including fevers, mild coughs and low heart rates. Two of the boys may have a lung infection, one of the chief concerns given the amount of time they have spent underground in damp conditions.

In addition to lung infections, there are fears the boys may have developed pneumonia, leptospirosis — a bacterial disease that affects humans and animals — and melioidosis, a potentially-fatal disease found in contaminated soil. It’s also likely they will be tested for hypothermia.

The official said the second group will be able to see their parents, but they will have to communicate behind the glass wall of a quarantined hospital room.

The first four who were rescued have been able to move onto soft food. Their chief request? Well, what would a bunch of teenagers want after a fortnight underground but chocolate? They deserve many, many bars.