According to a Hadashot TV news report Sunday morning, the Iranian Boeing-made cargo plane was loaded with weapons, and had recently landed at the Damascus International Airport from Tehran.

The strike attributed to Israel also reportedly targeted several weapons storage rooms at the airport. Efforts were made to disguise the true purpose of the buildings, the report said, with some of the warehouses labeled “United Nations” or “DHL,” the international mail company, in an apparent effort to evade Israeli intelligence-gathering efforts.

The Syrian state news agency, SANA, reported late Saturday night that Israel had targeted the airport with missiles, activating air defenses, which shot down a number of the projectiles.

The Britain-based Syrian Observatory for Human Rights said the attack targeted an arms depot near the airport where new weapons recently arrived for the Iranians or their Lebanese proxy, the Hezbollah terror group.

On Sunday, the monitoring group said that the alleged Israeli strike caused “substantial” damage at the airport, but had no immediate information on casualties.

Israel rarely acknowledges attacks inside Syria, but has said it is its policy to employ military action to prevent weapons transfers to its enemies.

The IDF earlier this month acknowledged that it had conducted airstrikes against over 200 Iranian and Hezbollah targets in Syria since 2017, shedding light on its largely quiet activities across the border to prevent Tehran from establishing a permanent military presence in the war-torn country.

For years, Israel has been concerned that Iran is using opportunities presented by the Syrian civil war to entrench itself militarily in the country in order to further threaten the Jewish state — alongside the threat already posed by Hezbollah in Lebanon. 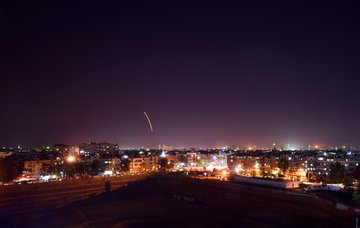 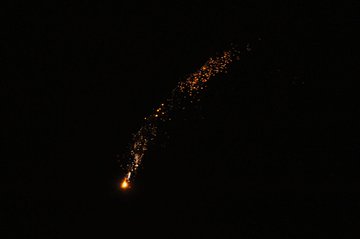 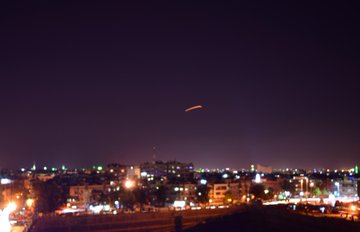 The 202 targets hit in Israeli airstrikes since 2017 were mostly shipments of advanced weaponry, as well as military bases and infrastructure, which the IDF officials said drove Iranian forces to abandon some posts.

In addition, Jerusalem has tried to get the Islamic Republic out of Syria through diplomatic means by appealing to the two main power-brokers in the region: Russia and the United States.

While Russia does not seem to have accepted Israel’s demand for Iran to be completely removed from Syria, it has agreed to force the Islamic Republic’s forces and proxies to leave the areas closest to the border with Israel.