SACRAMENTO —  California announced Thursday it will impose a mandatory overnight stay-at-home order for much of the state as COVID-19 surged to unprecedented levels and hard-hit Los Angeles County careened toward even more severe lockdown measures.

While the coronavirus is surging across the state, the situation in Los Angeles County was quickly reaching crisis levels, with nearly 5,000 new coronavirus cases Thursday, the most it has seen in any one day since the pandemic began.

Morever, California set another record for most coronavirus cases in a single day Thursday. An independent county-by-county tally conducted by The Times found that 13,422 new coronavirus cases were reported Thursday, the second time in a week the single-day record has been broken.

The single-day record was last broken on Monday, when 13,412 coronavirus cases were reported.

Officials said they are alarmed by the rapid spread of the infection. For the two-week period that ended Thursday, average daily cases over a seven-day period have jumped by 102%, from more than 1,600 cases a day to nearly 3,300 cases a day. If the number of new daily coronavirus cases on Friday, Saturday and Sunday remains the same as Thursday’s, L.A. County could cross a red line as early as Sunday that would put the region on the cusp of a new stay-at-home order.

Whether such a new stay-at-home order would happen automatically or wait for a few days hasn’t yet been decided, L.A. County Health Officer Dr. Muntu Davis said. A new lockdown measure would be another body blow to businesses struggling to survive amid the pandemic. Davis and others said they want to keep businesses open but might not have a choice if the outbreaks cannot otherwise be slowed. 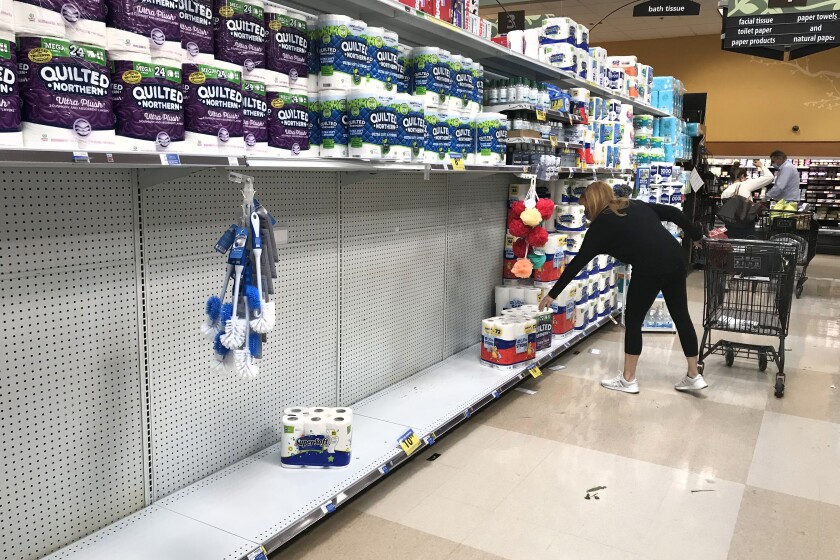 “At this point, no one should be still underestimating the spread of this virus, nor should anyone be questioning the actions we still need to slow the spread and lessen its impact on our collective health and our local economy,” Davis said. “With the surge in transmission of COVID-19 in Los Angeles County, it is safe to assume that many people are infected without even knowing it yet.”

A Times analysis has found that California is now averaging more than 10,000 new coronavirus cases a day over a seven-day period. California has not experienced a daily case count this high since the outbreak began, even during the surge in the summer that stands as the state’s deadliest time of the COVID-19 pandemic.

The new order issued by the California Department of Public Health will prohibit most nonessential activity outside the home from 10 p.m. to 5 a.m. in counties in the strictest tier of the state’s reopening road map — the purple tier. The restriction goes into place on Saturday and lasts through Dec. 21, though it could be extended.

“The virus is spreading at a pace we haven’t seen since the start of this pandemic and the next several days and weeks will be critical to stop the surge. We are sounding the alarm,” Gov. Gavin Newsom said in a statement released Thursday afternoon. “It is crucial that we act to decrease transmission and slow hospitalizations before the death count surges. We’ve done it before and we must do it again.”

Roughly 94% of Californians — 37 million people — live in counties that are in the purple tier, which has forced many businesses there to suspend or severely restrict the number of customers allowed indoors.

“We are asking Californians to change their personal behaviors to stop the surge. We must be strong together and make tough decisions to stay socially connected but physically distanced during this critical time. Letting our guard down could put thousands of lives in danger and cripple our healthcare system,” said Dr. Erica Pan, the state’s acting public health officer.

The restrictions are different than the statewide stay-at-home order Newsom issued in mid-March, in that they focus more on curbing late-night drinking and group gatherings. Californians in the affected counties will still be allowed in the overnight hoursto buy groceries, walk the dog,pick up restaurant takeout orders, visit doctors or other healthcare providers and other providers of essential services.

Dr. Mark Ghaly, the state’s health and human services secretary, said the limited stay-at-home order focuses on the late night because that is a time when people tend to congregate and let their guard down, either at gatherings in their homes or elsewhere.

Bars and restaurants are settings that can easily spread the coronavirus, through talking and even breathing. A Centers for Disease Control and Prevention report found that adults with positive coronavirus test results were about twice as likely to have reported dining at a restaurant than those who tested negative.

Even if people up at these hours tend to be younger — and less susceptible to the ravages of COVID-19 — they can still contract the virus and infect others without showing symptoms, Ghaly said. Eating and drinking in groups increases the odds of spread since people must remove their masks to ingest or imbibe.

“COVID can go from zero to 60. Very quickly. And it has, we’ve seen it across the nation,” Ghaly told reporters at an afternoon news conference, warning that more restrictions are possible. “Today’s actions are an important step, but not the only step. And as the rate of transmission gets stronger, I think we will too.”

While accepting an award this week from San Jose State University, Dr. Anthony Fauci, the U.S. government’s top infectious diseases expert, said that a policy of ordering bars and restaurants to close at an earlier time has helped to control the pandemic in other countries.

“When you look at what happens as you get late into the evening, people let down their guard, people maybe drink a little bit too much, people get in congregate settings,” Fauci said. A public policy decision to shorten such business hours to control the pandemic is sound, he added.

Newsom was noticeably absent from Thursday’s news conference, a departure from his usual practice of making major announcements about the state’s COVID-19 response.

The governor announced the curfew as he faces scrutiny over his own behavior and cases increase. Newsom apologized this week for attending a Nov. 6 dinner party at the French Laundry, where he joined people from other households and several lobbyists at the upscale Napa Valley restaurant to celebrate the 50th birthday of a close friend.

He said on Monday that the party was held “outdoors,” a description that was contradicted when pictures of the event surfaced the next day.

Reaction from the restaurant industry was mixed Thursday, with some critical but others supportive.

Everardo Santiago, owner of the Inglewood-based El Oaxaco Taqueria y Antojitos Oaxaqueños, said Newsom’s decision could hurt him but he endorses it nonetheless.

“If we can all cooperate in this moment and do things the way they should be done, it will be easier,” Santiago said.

“The Sacramento County Sheriff’s Office will not be determining — including entering any home or business — compliance with, or enforcing compliance of, any health or emergency orders related to curfews, staying at home, Thanksgiving or other social gatherings inside or outside the home, maximum occupancy, or mask mandates,” Jones said in a statement.

“The governor likes to tout that his actions are scientifically driven, but evidence simply does not support such drastic action limiting people’s freedom,” Gallagher said in a statement. “This virus does not suddenly come out at night, and there is little evidence that shifting businesses’ operating hours has any impact.”

Long Beach Mayor Robert Garcia, a Democrat and strong political ally of Newsom, praised the action announced on Thursday, saying it will “save lives and provide relief to our hospitals and our healthcare system.”

Garcia is considered to be among those Newsom may appoint to fill the U.S. Senate vacancy that will be created when Sen. Kamala Harris is sworn in as vice president.

Most of those who test positive eventually will recover, and many do so without needing to be admitted for professional medical care. However, Ghaly added, authorities expect that roughly 12% of those testing positive will end up in hospitals in two to three weeks.

Starting Friday, L.A. County will begin ordering restaurants and nonessential stores to close their doors to the public at 10 p.m., although takeout and delivery services can continue after that time. The county will also place a cap on the number of people allowed at outdoor gatherings — a maximum of 15 people from no more than three households.

If the county reaches 4,000 average cases daily over a five-day period, officials would stop outdoor dining at restaurants, returning eateries to offering only delivery and takeout service for the first time since May.

If new cases worsen still further, hitting 4,500 average cases daily over a five-day period, the county would impose a new stay-at-home order that would generally only allow essential workers and people securing essential services to leave their homes, and implement a 10 p.m.-to-6 a.m. curfew that only exempts essential workers.